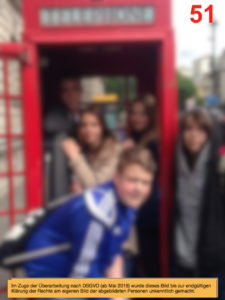 From the 19th to the 23rd of May, my bilingual class and me were in London. I want to tell you something about my favourite shopping experience.

The day started with a visit to the Jewish Museum in Camden. After that, we had some free time. I joined the group with Antonia, Melanie, Christopher and Jerome. Our idea was to visit Camden High Street. There were plenty of small shops with different items from clothes to electronic devices – they simply had everything. On Camden High Street, there were about hundreds of street artists, so it didn’t get boring.

After the shopping trip we took the tube to Trafalgar Square and ate healthy food at McDonald’s. Following, we met the rest of the group at Trafalgar Square. After that, we walked to Oxford Street. Then, I joined Lea, Natalie, Jessica and Enrico. We walked down Oxford Street and visited different shops all along the street.

At 8 pm we drove back to our hostel.

In the evening, I was glad to be in my bed.

I really enjoyed this day because we saw a lot of things and had a lot of fun with everything. The trip to London was the best class trip I had so far.

The third day of our trip was the best day for me.

We were shopping in Oxford Street. I was there with Jessica, Fabio, Enrico and Lea. We all love shopping, so we thought it would be a good free-time activity for us.

First, we drove with a cute red bus through Oxford Street and from the bus, we saw all the big shops. We girls were so happy. My friend Jessica screamed – out of pleasure.

After we had got off the bus, we ran to the first shop.

The shops are not the same as in Berlin.

The day was so exciting.

All of us had big shopping bags.

Following the shopping, we went to McDonald’s.

At last, we drove back to the hostel.

But the sad thing was that Jessica’s shopping bags were stolen in the Hostel. But the other things were all beautiful.

I miss our time and the shops in London. 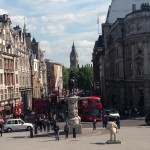 TRAFFIC LIGHTS … WHAT IS THAT?

From 19 to 23 May, we were with our Bili Class in London. The three teachers, Mr Krause, Ms Weiß and Ms Heck, played our parents.

As we were crossing the first street in London, we noticed that we were the only people who waited for the green traffic lights. The English people cross the streets and ignore the traffic lights.

One day, one man said to me that you have to live like the inhabitants of a city, but I think that would be very dangerous in London.

Every time we left our St Christopher’s Hostel, we saw some people crossing the street, who thought they were immortal.

And at the end of the week, I turned into a real Englishman myself.

On the last day of our class trip, my two friends and me decided to go for a last long walk through London. Because we had no money left, we went to the next tube station and returned our Oyster Cards so each of us could get her £ 5 deposit back.

We started our walk at London Bridge Station and went to our first destination (Buckingham Palace) through London’s downtown, passing Big Ben, Westminster and a lot of other old buildings. Because of the many beautiful animals, we stayed longer in St James’ Park than we actually had planned. There were squirrels and A LOT of different birds. Swans (even black ones), geese with little babies, ducks, many pigeons and a bunch of other species I didn’t even know. All these animals were really tame and came very close to the people.

Finally, we arrived at Buckingham Palace to look at it for a last time, hoping to come back one time.

Our next destination was Harrods, to spend our last money.

The three of us were really enjoying walking through London even though our feet hurt.

We did not notice how much time we spent at Harrods and were shocked when we looked at our watches. Of course we had also spent our deposit money, so there was no other way back to the hostel than, again, by foot.

This was horrible, I’ve never felt in such a hurry.

We only had one hour left but needed a LOT longer. Making our way through the St James’ Park again, I saw something I would never have expected to see in London. Five pelicans were walking in a row, not even paying attention to the people around them. They were so big and to be honest I was a little bit afraid because their beaks were huge and looked dangerous. When one of the pelicans jumped over the (decorative but not very useful) fence directly into the crowd, spreading its big wings, I was really scared but also impressed.

We had to move on, fast, very fast. Almost running and carrying heave bags I thought we were going to die.

I can’t explain how happy we were when we finally arrived at hour hostel. We ‘only’ came 30 minutes later than we should have but nothing bad happened (we were even greeted with applause …), we could still be at the airport on time.

Walking in London was just so nice that we forgot about the time, and I think I would forget about it again. It really can’t be compared with Berlin, I hope I will be able to go there again and again.