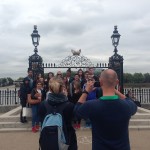 Our bilingual class travelled to London from 19th May to 23rd May. During those days, we had a lot of fun. I will tell you about my experiences.

On the first day we had to walk to our destinations. As we came to our hostel, the St Christopher’s Village, we had to put our suitcases in the luggage room because we couldn’t go to our rooms yet. So we had to waste our time. The first day was very unspectacular, but we explored our environment.

On Wednesday, we walked along the river Thames to Buckingham Palace to watch the soldiers march. Later, we went through Hyde Park to the museums. Fabio, Melanie, Christopher and me walked into the Science Museum and saw some fancy things there. After that, we were in a restaurant with our teachers.

On Thursday, we went to the Jewish Museum, where we learned a bit about the Jews. After that we went to Camden Market and bought some things for our friends. We had to meet again at Trafalgar Square and I was in the National Gallery with Ms Heck and Adjoa.

Our day was long – and so was our walk.

Fabio, Melanie and me also went to Oxford Street and saw many interesting people there.

On Friday, we got to Greenwich by boat. We walked up a hill to the Observatory. Then, we picnicked. In the evening, we got back to Westminster by boat and Melanie, Fabio and me went to New Bond Street and went into Victoria’s Secret. We bought some body mist and other secrets J.

As we went back, we came too late, but Ms Heck said it wasn’t so bad.

On the last day, Tomi and me walked through Borough Street Marked and searched for some candy named fudge. We didn’t find any, so we went back to the hostel and went with the class to the airport.

On May 19th, our journey to London started.

After a two-hour-flight we landed. One girl had lost her passport, so we waited until she found it. Lucky me – there was Wi-Fi at the airport so the time passed quickly. Following, we went to our hostel, St Christopher’s, by train. The moment I left the train, I realized how beautiful London is and that it has so much power to impress me. Happy that I made the decision to go there!

We checked in our room. I shared it with seven other girls but that was no problem because they are my classmates. We all were really relieved that the bathrooms and our room were clean.

Finally, we all met in the lobby and got great news – we had free time!

That’s why I really loved this trip. We saw so much in four days, we did a lot together but also alone. We had the pleasure to see London by ourselves.

The first day passed and the next days started with breakfast. I think that was the part I loved most. To be honest, we really needed a nutritious breakfast because we had to walk 12 kilometres a day minimum. It felt like we were walking to every sight and never used public transport. Maybe I didn’t realize that we drove by tube or bus sometimes, because I hate walking so much.

Anyway, when I look back now it was the best that could have happened. I’m way fitter now and I saw so much of London. I didn’t shop a lot because I rather enjoyed London. Especially Oxford Street and South Kensington Road had such a charm …

It’s really hard to describe, you have to go there to understand it. There are these white houses that look like houses from rich people. The streets are crowded with parked cars – big and expensive ones. I felt like in an episode of ‘Desperate Housewives’.

I fell in love with this city. Its nature, the large parks which have this London charm, the shopping streets and squares which are pure life. You can relax but also have the daily shopping, business trouble of London. 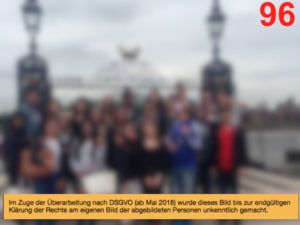 WAITING AT THE AIRPORT

Our class trip to London started on the 19th of May. Of course I was excited. I mean – I’ve always wished to travel to London. But what is a class trip without a little bit of chaos? That is my story about how I forgot my passport in the airplane and of two and a half hours waiting in a strange place.

We flew with EasyJet, only two hours. That’s nothing for me, normally I’m flying for six to ten hours or more. And every time I was flying, nothing happened. Only when it is a school trip. Then, I’m the clumsiest person on earth. In the airplane, most of us changed our seats to sit with our lovely friends and yes, me, too. So after two hours of flying we arrived in Gatwick, one of the London airports. But to my horror I noticed that my passport was gone – shortly before the passport control. I panicked and called my teacher for help. I wanted to cry, because I couldn’t find my passport.

Finally I remembered – I must have left it in the seat pocket.

And then my teacher asked the border control for my passport, and they told us to wait for only ten minutes. By then, an EasyJet person would have brought it to us.

We had to wait in a ‘waiting room’ square. I felt like they wanted to kid us, because we didn’t have to wait for ten minutes. We waited for two and a half hours! I still have a bad conscience and I’m thankful that Ms Heck waited with me. In the square, I felt like a prisoner. There were a lot of people in the square from time to time, but no one waited as long as Ms Heck and me (and my friends). For a bit of the time, the whole class had to wait, but then Ms Heck told Mr Krause that only a few should wait voluntarily and the rest should go to our hostel.

After two and a half hours of waiting I got my passport back.

All the time that we waited, Ms Heck and me were talking a lot and I thought of a lot of movies that could be made from our situation.

In the end, this class trip was perfect and I’m in love with London.

P.S.: I thank Ms Heck, Elisa, Selina, Melis, Leonora and Fabio for waiting for two and a half hours at Gatwick. MUCH LOVE!

Our class trip from May 19th to 23rd brought us to London. We saw many things, we enjoyed the city of London. The nicest part of this trip was that my friends and I saw the Rock (Dwayne ‘The Rock’ Johnson).

It was very unexpected. We were walking along the street at Piccadilly Circus. We were enthusiastic about London and Piccadilly Circus anyways. Suddenly, we saw a lot of people. They stood cramped. In the background, we saw a big television screen. We saw ‘The Rock’ and thought that it was from another event. But then, we recognized some people from the crowd on the big television screen!!

I think we took thousands of pictures of him! My heart beat like crazy and it even skipped a few beats.

After this adventure, our day was very funny. We talked about ‘The Rock’, and imagined stories about him.

London is really awesome! I would travel to London every week!